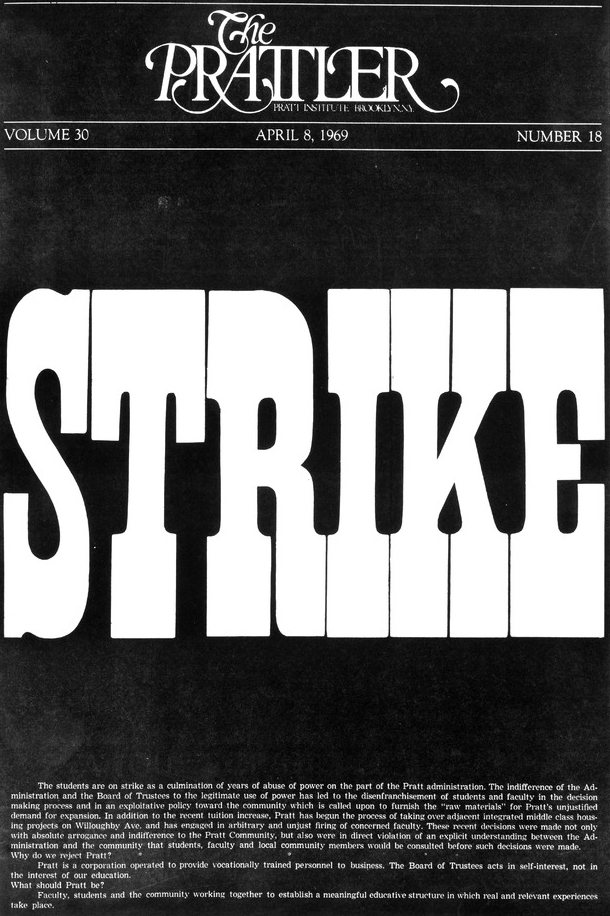 Protest at Pratt: student activism then and now

Last semester, Archives Graduate Assistants Miranda Siler and Nicole Marconi collaborated with Preserving Activism research fellow Amber Colón to create the Libraries’ first digital exhibit: Protests at Pratt: Student Activism Then and Now. Amber, a graphic design major minoring in Social Justice, is working on a strategic initiative project entitled Preserving Activism Beyond and Between Pratt’s Gates, which is devoted to exploring Pratt’s relationship to the social movements that shaped the school and community from the time of its founding to the present. Working on this exhibit provided a great opportunity for Amber to partner with Miranda and Nicole, two School of Information students pursuing Master’s degrees in Library and Information Science.

To develop this exhibit, Miranda and Nicole digitized and cataloged materials from the Archives, ranging from pages of the Prattler to ephemera related to protest actions. These documents trace student activism at Pratt spanning the late 1960s and early 1970s and include documentation of the demands of the Black Student Union for racial equity, the anti-war movement, the rapid rise in tuition costs, and initiatives for community involvement.

Check out the full inaugural exhibit